Of course you wouldn’t, you’d blow up the tyres. In some cases you might even investigate if there was a puncture. If so, you’d either repair or replace the tyre.

Some might even speak to a mechanic. Most mechanics, we assume, would point out you had a puncture and offer to fix it for you. Other mechanics might chance their luck and suggest that as well as new tyres, you also need new shock absorbers, new brake discs, new engine and a whole new respray (OK, so the last 2 might be exaggerated, but bear with us!).

In short …. at no point (we hope!), would you run out and spend thousands on a completely new car just because a tyre was flat. If anyone suggested you should, you’d absolutely (and rightly!) question their logic. You’d ask questions and try to weigh the positives and negatives of fixing the tyres versus buying a new car.

The new car, after all, may also suffer from flat tyres at some point. Would you buy a new car each time?

While we don’t claim to be car experts, we’re fairly sure most people over time have learned what a flat tyre is and that it can be repaired at a much lower cost than a new car.

OK, so what’s the point of all this car talk?

If you have a website that doesn’t perform as well as you’d like, what would you do in that situation?

We’ve met many companies over the years who, in that same scenario, have opted for the new website. Some have spent considerable sums of money on the process, making it look better to try and improve performance.

Unfortunately, in many instances, the new site doesn’t generate that many more leads, if any, than the original did (less, in some cases!). Yet unfortunately there is now also less money available to work with on addressing it.

What if the poor performance of the website was just an online equivalent to a flat tyre? For instance:

None of those justify high spend on a completely new website. All can be addressed without a rebuild. However, because we don’t know to ask, we often assume a completely new site is the only solution, and we spend money to get it.

What should you do?

Make sure your current site is setup to allow you to better understand how it currently works. From use of tools that measure site speed and organic ranking performance, to conversion tracking, heat mapping and A/B testing.

Those tools are all there to help inform decisions and help you ask questions!

They might sound technical, and we understand why some people avoid them, but they’d put you in a far better position to understand whether you need a new website, or if the current website simply needs some TLC … in the same way you can already decide whether a flat tyre merits a new car, or should simply be repaired. 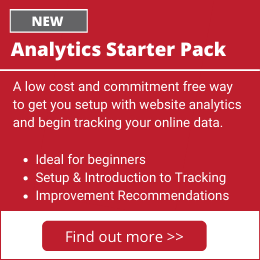